Come April there will be a yet another baby in Charm City. We're pregnant! 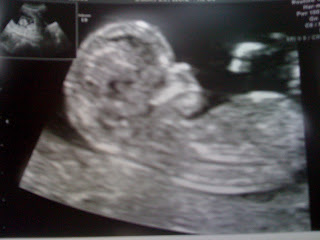 Olivia is going to be a big sister, a 19 month-old- big sister.   I'm measuring about 12 weeks along now and the scan above is from the first trimester screening where it appears that baby #2 has the same nose as Olivia. Cute!

During the appt Charm City Daddy begged the sonographer to please show him between the baby's legs. After she informed him that the male/female parts had not yet formed to determine gender, she showed him what appeared to be a "larger than girly nub." CCD kept his promise not to buy any boy gear but he's not hesitated to tell anyone who will listen--"there's a nub! we saw a nub!" Poor baby #2.
Posted by Charm City Mama at Tuesday, September 28, 2010