Olivia loves to brush her teeth and eat the baby toothpaste. The fascination with her "dentes" hit new heights when her favorite fictional friend Caillou went to the dentist. So since it was time for our semi-annual cleaning, I decided to add in an appointment for O.

First we watched the Caillou episode again and then about two days in advance, I told her she was going to see the dentist, too. I told her the dentist was going to ask her to say, "ahh" and "cheese", so she would be ready--and she was! She could hardly wait her turn--telling the dental assistant that was setting up "excuse me, excuse me please." It was hilarious. 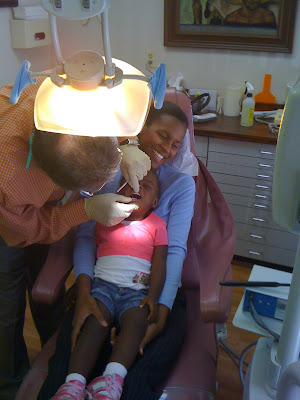 And look how tall she is, by the way! She nearly takes up my whole body on my lap. 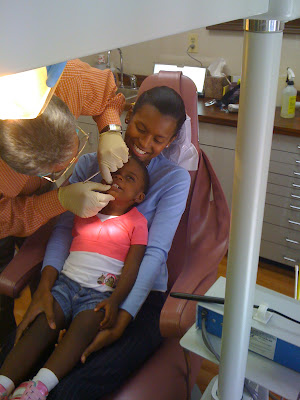 The dentist looked around, counted her teeth and gave her cherry flavored flouride. It took all of 3 minutes, and I think she was actually waiting for him to do more. I know I was. She was thrilled to get the toothbrush at the end and carried it around all day until it was good and germy and I had to forbid her to put it in her mouth.

She's been talking about and talking up Dr. Rubin ever since. Telling anyone who will listen. She would have you believe he could fix her itchy ankles (mosquito bites) and boo boos. Now I have to get her equally as excited about her pediatrician for her big 2-year check-up next month.

Just as I began writing this post...my little man, Lucas, reached up and pulled his musical mobile in his bouncy seat and made it play music. 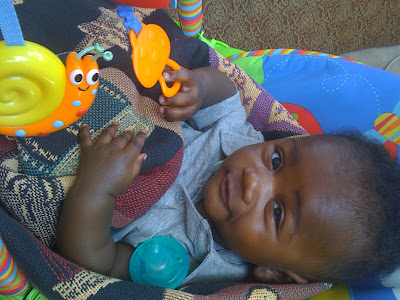 I looked at him and said, "you pulled it!" He looked at me and started laughing!  The eye-hand coordination is surfacing and my little baby is growing up before my eyes. He talks non-stop just like his sister. He loves tummy time too.  It won't be long before he's chasing her around and enjoying her antics.
Posted by Charm City Mama at Sunday, July 17, 2011