Yep, I'll never forget this one. Mostly because of all the snow that hit the Baltimore/Washington Region... 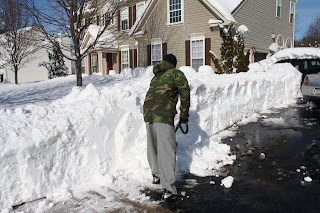 (My bro and his perfectly chiseled driveway job)
But also because when we returned home (from camping out at Mom's and Dad's) on Super Bowl Sunday, planning only to drop off our things, one of the cars, and dash back out to a friend's Super Bowl Party, we discovered that someone had broke into our home while we were away. They saw our unshoveled driveway (probably even knocked on the door) and then took advantage of the opportunity.

The chill of the open back window in our living room was the only thing that gave it away, as the house wasn't ransacked or torn apart like you would imagine.  The culprit(s) methodically (I mean they spread it out on the bed!) went through my jewelry taking only the "good stuff" and a few items from Charm City Daddy including a laptop he had in his home office. Our first reaction? Violation."They got us!" Our second reaction Thankful. "Glad we weren't home, and the baby has no idea what happened." Our third reaction? Anger. "I wish I could find the person who did this, and....!"

Despite the serial numbers and detailed descriptions, the police will probably never recoup what we lost. I hope I am wrong, but we shall see. I have no doubt our stuff is on the black market probably being used for drugs or something.  The weather has been a terrible factor in the response  and follow-up of the police/detectives too. I have to think that the police are also more consumed with crimes like homicide than a breaking and entering in good ole' Baltimore.

So why am I sharing this with you? I debated whether or not I would share this here, but then I thought if I could encourage others to take the time to make sure you have additional insurance on their valuables (I didn't have coverage on every item taken), turn ON their home alarms (even in a great neighborhood and especially in 30 inches of snow!) then sharing my story with you would be worth it.

So, that's that. It happened and as my friend Jess eloquently put it, "It's just stuff." Although I no longer have my "push present" and some other sentimental "stuff" I am thankful to have the REAL present that came after the push--Miss Olivia, who laughed and talked when the police officer arrived.  Love my baby so much.

Oh and we didn't make the Super Bowl party (nor did we see any of the fun commercials).
Posted by Charm City Mama at Thursday, February 11, 2010