About a week ago a colleague told me that when her daughter was pregnant she had an ultrasound at a private baby imaging office outside of her normal OB office. Until then, the thought had never crossed my mind.

Soon after, I mentioned it to Charm City Daddy focusing on the idea that we could get a 3D or 4D DVD of baby between 25-30 weeks. And then he asked the question I should have known he was going to ask..."Can we also find out the baby's gender a little earlier?" (Background: We're not supposed to find out with our doctor until March 30.) That immediately spurred a frenzy of searching for a local office and an appointment, and Friday the 13th at 4 p.m. was our big day.

Both of us confidently went into the appointment with pure and utter confidence of the gender of our baby. This ultrasound was only confirming what we already knew--at least that's what we told ourselves.
As CCD flew through rush hour traffic going 80 mph and weaving in and out of cars, I inhaled some chocolate pudding to get Charm City Baby moving for the camera. Seconds into the appointment it was apparent that either the pudding had worked or Charm City Baby also shared in my terror of the skillful, but scary driving of CCD. CCB was kicking all over the place--and by "place" I mean my bladder over and over again.
But the good news is, it provided a great view of the very telling "money shot." 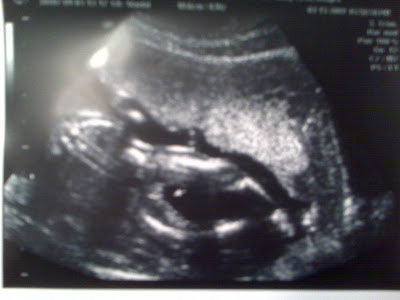 It's a GIRL!
At first I could've sworn I saw a little penis, but clearly there is no penis there.
CCD's reaction was priceless, too. Keeping in mind this is the first sonogram that he has experienced he was thrilled to be seeing the baby in action. He was laughing, pointing, and at one point talking into my belly in his "daddy voice" telling the baby to move a certain way. :) (we don't tell him baby can't quite hear him yet).
When CCD found out it was a girl, he laughed, then smiled and then put his hands on his head and had what we'll call "a moment."Basically, he realized that's really going to have to parent our little girl and not just rumble and tumble as he had planned with a boy.
I was also shocked about having a girl too, particularly because all of my symptoms or non-symptoms had pointed to boy. Though I hoped we would have my parent's first grandson after 3 granddaughters, I must admit, I'm a bit relieved. As a parent, I definitely know how to do the 'girl thing'--at least I think so.
We are both so thrilled and can't wait to meet little OLIVIA!!
Check out her nose! It's her daddy's nose..."bulby." lol. I love it! 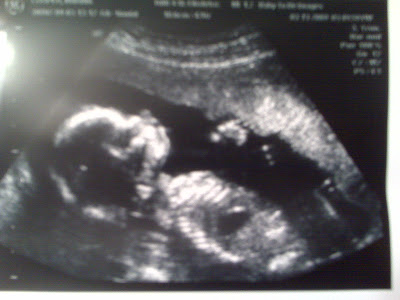