BEFORE: The Toddler to Tween Room

I can't promise that this room project will be as dramatic as the nursery. The nursery was easier mostly because I had a single inspiration room that I loved to draw from and it was also a small space.This next room for Olivia is bigger (almost twice the size of the nursery) and I'll be drawing from many different places of inspiration.

To keep things honest (and to make my after pics look even better--hehe), we really need to start with before pictures of the way the room looked when we bought the house. A bit creepy and stuck in the era of when the previous owner was 16. You see this was the previous owner's bedroom set when she was 16--IN THE 1960's!! 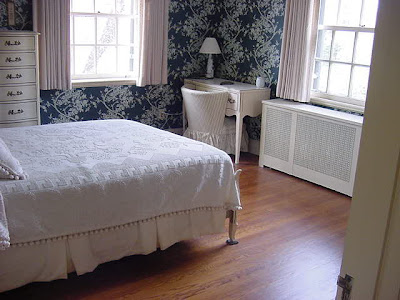 horror film scary- before
I actually don't mind the furniture too much. She left it behind, so I moved it to one of our third floor bedrooms with a happier pink, yellow, orange theme.

After my  mom and I put in a week-long effort, we called a professional to remove the 20-plus year-old navy wallpaper, the wallpaper beneath it, and when we got to the third layer of wallpaper, I told the wallpaper pro to JUST STOP. Then my mom and I starched navy/white toile fabric onto one wall and we slapped white primer on top of everything else in the room. So here's a pic of the room as soon as we finished--wrinkled duvet and all... 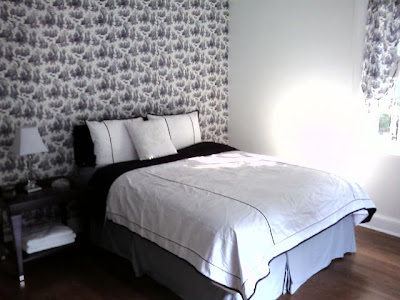 It was a temporary fix in Summer 2007 so I could focus on getting married and getting the house ready for visiting guests. It worked and is basically a fresher interpretation of the same room. We also experimented with curtains--which is why  ribbon from Crate and Barrel wedding presents are holding them up. The grosgrain gifts that kept on giving. How yah like them apples? 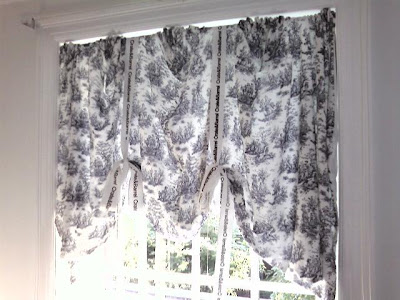 So as you can see, we have nowhere to go but up. Ha! Primer, Crate and Barrel ribbons, wrinkled duvets, king-sized bedskirts finessed to fit queen sized beds, the end table from my old bachelorette pad used as a night stand--this is obviously high-end decorating folks. Go ahead and envy me.