A Change of Heart...

It is safe to say I have come full circle on my philosophy on changing tables.

First, I was hesitant to buy one because I thought it was a waste of money for a temporary piece of furniture. Then I rationalized buying one because after all our plan is to have four babies that will need their bum-bum changed.

So, I purchased a dresser than has the optional changing table topper attachment, which I ended up hating because it does not fit a standard changing pad and it wastes valuable floor space behind the changer. So in the nursery I am back to using what could pretty much qualify as a standard dresser with a few handy dandy features like hidden drawers and open shelving and changing pad that will be screwed on. 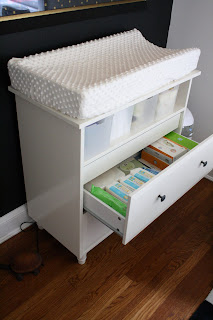 However, we will also need somewhere to change the baby on the first floor as well--where we do a good amount of living. So now, I am about to purchase my second changing table.


I know it's likely that we may end up using the floor, couch, kitchen counter or whatever to change Charm City Baby, but for $69, I think this portable/foldable changer from IKEA would get a fair share of use. 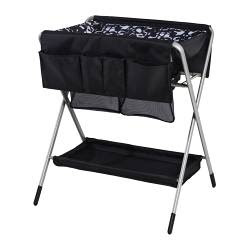 I first spotted the IKEA Spoling Changing Table when I was picking up the nursery furniture, but I remained discipline and stuck to my list. I must have stood in front of it for a good 10 minutes--but I was strong. Now, I have been thinking about getting the thing ever since.


As soon as I get a chance to get to IKEA, I am returning that useless topper from the other changer, and scooping this one up.
Posted by Charm City Mama at Tuesday, July 07, 2009