A few developments to report as the nursery nears completion...

First--the changing table topper was a BUST! I knew I wouldn't like the way it makes the base dresser sit out from the wall, but I was not prepared for the fact that it wasn't going to be compatible with the standard changing pad. IKEA this is not like you. You are better than this. What happened here? 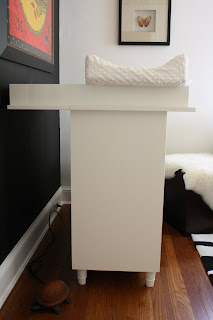 I was willing to take the extras space on top for wipes/supplies, but the topper can't even hold the pad. See it sitting up on the side instead of inside? Boo!


Second--the dresser knobs I ordered finally arrived! The first company I used was terrible and failed to let me know the knobs were on backorder. Terrible service. Full refund. I ended up finding an even better knob with a second company--but they only had 10 in stock (but they called and told me up front) so I got the first 10 and I'm waiting for the remaining six on backorder in a couple weeks. 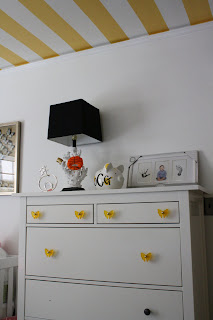 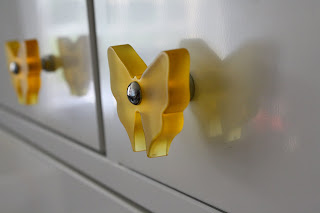 Originally I had chosen a standard yellow knob but I'm glad I ended up with the butterflies. They are fun! I thought the room could use a few more feminine touches. I also ordered a standard yellow knob, in case the nursery will need to take on a masculine look for baby #2. That's right--we're running all (4) of the future 'CharmCity' babies through this room--that's the plan anyway.

Finally, when decorating nurseries or bedrooms most folks start with the bedding. I always knew I wanted a nice plain white set, but for us, it's one of the last things to arrive in the nursery. It arrives Monday! I'll do another update or perhaps it's time for a finale when I get it all set.